By printing onto optically clear film, The Window Film has been able to recreate a stunning run of intricate graphics for a premises based at Luton airport.

The graphics were required to meet manifestation requirements, which dictate that glass of a certain size must have clear markings in order to make the glazing easily visible. Whilst the location and minimum size of the markings is set by building regulations, the appearance of the manifestation can be bespoke.

For this project, it was decided that the manifestation should take the form of a sketched-effect London skyline. The style of the graphics would give a contemporary and eye-catching appearance, with the inclusion of the instantly recognisable London outline providing a visual link to the company’s London headquarters and roots. 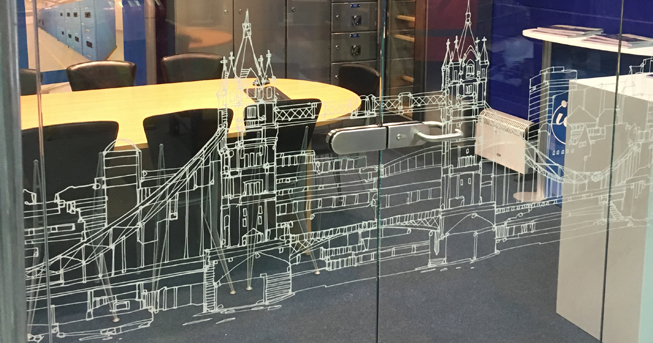 It was agreed that the best way of reproducing the graphics would be to print the design using a frosted effect onto optically clear film. This method allows for the creation of incredibly intricate graphics in perfect detail. By printing on and installing optically clear film, only the printed area is visible, giving the impressive impression of a cut graphic.

The Window Film Company’s in-house graphics team provided a number of sample panels, each with different levels of opacity, allowing the client to experience the different possible appearances in situ before deciding on the final look. With the graphics approved, print could commence.

As with all print and installation jobs, the graphics were created at The Window Film Company’s Buckinghamshire headquarters, where each of the five panels were printed. Care was taken to ensure that the gap between the partitions was accounted for, making certain that the graphics flowed perfectly from one pane to the next, with no disruption in the appearance of the design.

The finished project, installed by one of The Window Film Company’s fully qualified fitting teams,  delivered a stylish manifestation solution that ensured the glass not only met building regulations but also provided the premises with a stylish, impressive and professional look.

To download this case study as a PDF document, please click here.
Got a Question? Window Film FAQs
How To Fit Window Film Videos