Having been established in 1998, The Window Film Company have developed the experience, infrastructure and processes to be able to deal with large scale projects. This ability was called upon by Northwick Park Hospital, who required an application of almost 2,500 square metres of safety film.

Having submitted a successful tender, The Window Film Company was awarded the project which required multiple solutions. The hospital had a need for safety film, manifestation and a coloured film for decorative purposes. The work was required within a strict timeframe, so after a series of site visits to discuss and agree on the film type, a schedule of works was put together and approved.

The main body of the project involved the application of safety film, necessary to ensure that glazing meets the appropriate EN12600 2B2 standard. The film applied to achieve this was 100 Micron Safety film. This product benefits from being completely clear, allowing perfectly unobscured vision from both sides of the glass, whilst still upgrading the glass to safety standard. The film was fitted to a precise schedule, with specific windows treated at specific times, to ensure the minimum of disruption at the hospital.

A small quantity of an alternative safety film was also fitted in certain locations throughout the hospital. 200 Micron Silver is a thicker film than the 100 Micron version with a reflective finish. As well as delivering a high standard of safety, well in excess of the levels required by building standards, the mirrored finish of the film provides an element of privacy. Reflective window films such as this provide one-way privacy, allowing vision from one side of the glass whilst preventing it from the other. The benefits of this to a hospital are clear, with numerous areas requiring privacy.

A total of 2,455 square metres of safety film was installed during this phase of the project.

Glass manifestation is required when glass in certain locations is over a particular size. The legislation is in place to ensure glass is visible, 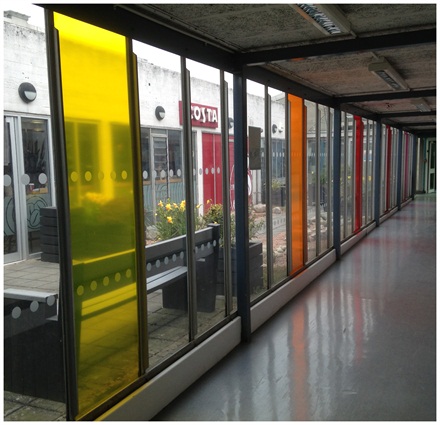 thus reducing the chance of accidents. As long as manifestation is applied to the parts of the glass detailed in the legislation, manifestation can take on any form, ranging from dots and squares, to logos, images and other bespoke designs. On this occasion, the hospital decided on dots – a popular choice for manifestation.

The dots were created from The Window Film Company’s Frostbrite range of frosted films. The film, which once applied gives glass a sand blasted or acid-etched appearance, is perfect for use as manifestation as it provides and obvious yet stylish contrast with the appearance of the glass  - serving to make the glass obvious without detracting from the aesthetics. Almost 800 metres of manifestation was fitted throughout the hospital.

Northwick Park is a large hospital with long corridors and passageways throughout and in a bid to brighten up a number of these corridors, an application of coloured window film was undertaken. Rainbow film from The Window Film Company is a range of coloured films that will immediately transform the appearance of the glass, whilst still allowing vision from both sides and allowing high levels of light to pass through the glazing.

A selection of colours was agreed upon and installed down a number of corridors, immediately transforming the atmosphere and feel what had been cold and uninviting parts of the facility.

The Window Film Company’s teams of installers are highly trained, fully qualified and vastly experienced, allowing them to operate effectively, whatever the size or location of the job. As a fully functioning hospital, there were restrictions about what areas could be accessed when, so a meticulous installation plan was created and adhered to.

Measurements were taken in advance of the job, but before fitting, the installation teams take another precise measurement before cutting the film on site. This ensures that each pane is fitted perfectly, with minimal wastage. In the case of the safety film, a kite mark was applied to each pane, indicating that the glass now met the necessary standard.

The work was undertaken over a three week period and was delivered within the identified timescales, with a number of The Window Film Company’s installation teams dedicated to working on the project during this time.

With a number of different film requirements, time constraints and a limit on access, this was a potentially challenging project, but in using tried and tested processes, experience and by working closely with the hospital, The Window Film Company was able to deliver the project on time and with the minimum of disruption.