Bomb-blast protection is unfortunately required in an increasing number of situations, and The Window Film Company offer a comprehensive range of products to provide the best possible mitigation, including specially developed window films and attachment systems.

It’s important to be aware that no window film or attachment system can completely remove the threat posed by an explosion or bomb-blast,
but by matching the correct solution for each situation the security and safety of your building will be improved dramatically.

In the event of a bomb-blast or explosion, a single square foot of glass can shatter into 200 sharp fragments, each of them potentially lethal.
An application of specialist window film will help mitigate against this. The film works by holding the glass together in the event of breakage, preventing the broken shards from separating and being propelled through the air.

The Window Film Company’s bomb-blast film is available in a range of thicknesses and grades, with each option having been extensively tested at independent testing facilities to ensure the best possible protection against criminal damage, bomb-blast, extreme weather or explosion. 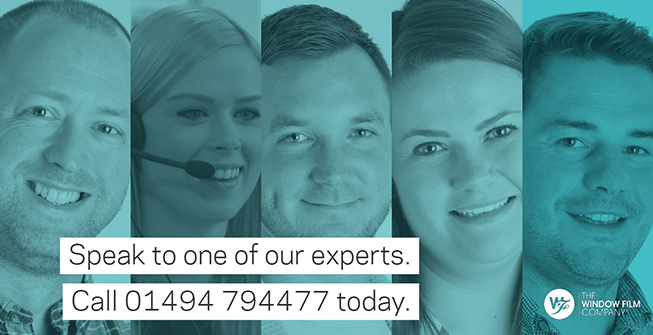 Whilst window film will provide an extra layer of valuable protection, applying the film in conjunction with an attachment system will deliver the most comprehensive security available. Such systems work by anchoring the window film to the window frame so that in the event of an explosion, the system holds both the film and the window in place, mitigating the potential impact of the blast.

The Window Film Company are able to offer the Madico SafetyShield range of systems, which thanks to a rigorous and extensive testing programme have been shown to provide the ultimate in blast protection. With four main options available, it is important to understand the performance level and suitability of each system before proceeding.

1)      Wet Glaze Anchoring System. This method sees a triangular bead of structural silicone added to the joint between the safety film and the window frame.

2)      Gull Wing™ Anchoring System.  This system uses a flexible membrane that is attached to both the filmed glass and the window frame.

3)      LifeLine™ Anchoring System. Used primarily in factories or industrial locations, the LifeLine system works by applying energy absorbing cords across the window. These cords catch the filmed glass in the event of a blast, preventing it from entering the building and causing damage.

4)      FrameGard™ Anchoring System. A mechanical attachment system that clamps the filmed glass to the window frame, keeping the glass within the frame in the event of an explosion.

Blast mitigation is a serious issue and it is of vital importance that the correct solution is provided for each individual set of circumstances. These can vary due to the type of building, the design of the windows and the type of threat faced, so we always recommend contacting us directly to discuss your specific situation. The Window Film Company’s trained team of experts can then provide advice as to the best course of action for your project, so for further information, please call 01494 794477.

Download our Commercial Brochure for details on our full range of films
Got a Question? Window Film FAQs
How To Fit Window Film Videos