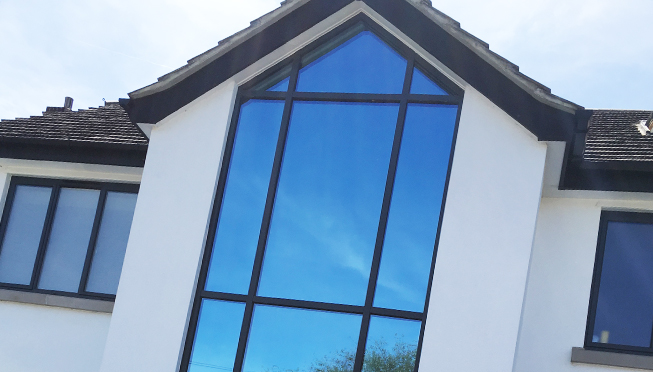 Window film for rejecting heat, often referred to as solar control or heat reduction films are designed to be retrofitted to our glass, providing a cost-efficient and incredibly effective solution to uncomfortable internal temperatures.

What are heat rejection films?

Window films for reducing the heat are available in a range of appearances and grades, each with a different level of performance. The basic premise remains the same, however, with solar control films taking on a reflective external appearance to bounce away a percentage of the sun’s solar energy before it can pass through the glass and add to the internal temperature.

Each film supplied and installed by The Window Film Company is technologically advanced; specially developed to provide the best possible performance while also being easy to install, long lasting and unobtrusive.

Solar control window films, or sun control films as they are also known, work on a simple but highly effective premise to reduce heat gain. Once applied, the films take on a reflective external appearance, giving the outside facing side of the glass a mirrored look. This can be beneficial in additional ways, it provides an excellent one-way privacy solution for example, but in this instance, the primary function of the appearance is that it serves to reflect away a percentage of solar energy created by the sun.

The film effectively acts as a barrier to a portion of this solar energy, weather a reflective film or tinted film, preventing excess heat from entering your property without making it feel unduly cold. On a warm day you will still enjoy the benefits of a pleasant temperature without it getting excessively hot.

Simply put, the window film bounces away heat, preventing it from passing through the glass and stopping the steady, relentless build-up of heat.

Why should I choose a solar control window film?

An application of window film is the perfect choice for dealing with excess heat, not just because it is an immediately effective and long-lasting solution, but also because it is so much more effective than other options. Take curtains or blinds, for example. Both these traditional methods are set back from the window, meaning that unlike window film they allow solar energy (heat) to pass through the glass before simply trapping it. The other downside to using blinds or curtains is that they also block the light and the view to the outside; two of the major benefits of having windows in the first place.

Another reason for choosing heat reduction window film for your home or office is that it is far more cost effective than more heavyweight cooling solutions such as air conditioning. These systems can be expensive to run and create emissions that aren’t environmentally friendly. Window film from The Window Film Company will help address excess heat issues in a far more cost efficient and environmentally kinder way.

What heat reduction film is right for me?

There are a number of films available for fighting overheating in the home. Which one is right for you will depend on a number of factors, including your glass type, aesthetic requirements and desired performance levels.

There are a number of factors that you can consider when considering your choice of film, however. Most of our solar control films work by giving glazing a reflective external appearance. Different grades or reflectivity are available, but it’s important to recognize that it is this feature that makes the film effective in rejecting heat, so the more mirrored the external appearance, the more effective it will be at combatting heat. Give some thought as to your aesthetic requirements as well as the performance level and one of our team will be able to guide you towards the most appropriate solution.

The simple answer is no, an application of solar control window film will not make your room dark. On a bright sunny day, you will continue to enjoy the sunshine – the film has been specially designed to allow excellent levels of light transmission while still delivering excellent solar control performance.

It’s important to note that the window film works on the balance of light; the reflective appearance will be present on the side of the film that is exposed to the higher level of light – during daylight hours this will almost exclusively be the external face of the film, meaning that the view from the outside in will be obstructed, with the view from the inside out maintained. Think of it as putting a pair of mirrored sunglasses onto your glazing!

In short, on a bright day, you can still expect your room to be filled with light; you can install solar control window film without fear of making your home unnecessarily dark.

There are a number of additional benefits to using solar control window film in your home.

The mirrored external appearance of the film means that it is a great way of delivering one-way daytime privacy. Once installed, those passing by your windows will be met with their own reflection, unable to see in, while those inside the property will still be afforded a view to the exterior.

Solar control window film is also hugely effective when it comes to reducing glare. A potential problem all year round, glare can make it difficult to comfortably focus on screens or read, with bright sunlight passing through untreated glass. Window film will block the harshest of the light, without making it dark, immediately helping to create a more comfortable internal environment.

Fading can be a destructive and expensive problem, often going undetected until the damage has done. Caused by three main factors; UV rays, heat and light, an application of window film from The Window Film Company will help to slow down the fading process by not only reducing heat but in terms of a percentage, will reduce 99 of UV rays.

For specialist UV reduction films that require a spectrally selective function, The Window Film Company offers specialist films such as Amber 81, a film that will still allow for the passing of visible light but uses an amber colouring to block almost all UV light.

For more information about any of these additional benefits, please contact a member of the team on 01494 794477 or by emailing info@windowfilm.co.uk.

How do I install a solar protection film for glass?

Installing window film can be successfully undertaken with no prior experience and a few easily available household items. We recommend that for large windows, installation is carried out by two people and not before carefully consulting the printed fitting instructions that are supplied with each order. You will also receive a free plastic application squeegee, while we also suggest taking the time to view the step by step video fitting instructions that are at the bottom of each product page on our website.

To begin the installation, thoroughly clean the window before filling a plant spray bottle with water and adding a couple of drops of washing up liquid to create a soapy water solution. Use the spray bottle to cover the surface of the glass with soapy water, before carefully removing the backing sheet from the film and doing the same there, taking care to cover the entirety of the exposed film with the soapy water solution.

Then take the film to the pane and allow it to flow onto the glass. The slip solution will allow you to move the film around until it is in the precise position you require. Then use the squeegee to push the remaining moisture to the edge of the pane, wiping away all excess with a clean cloth. With that, the installation is complete!

If you’d prefer not to carry out the installation on a DIY basis, The Window Film company can take of it for you, with teams of fully qualified and vastly experienced fitters offering a nationwide window film installation service.

For more information on getting your solar control window film installed by The Window Film Company or for details and information about any of the products we stock and supply, please don’t hesitate to get in contact with a member of our team by calling 01494 794477 or email info@windowfilm.co.uk.