Glass partition graphics to provide privacy in a Hospital ward

Hospitals are often difficult places to be, so there is an understandable desire to ensure that when possible, the interior is as calming and welcoming as possible. Creating a comfortable environment is key, and The Window Film Company were approached by an Essex based hospital to help to totally transform a ward. 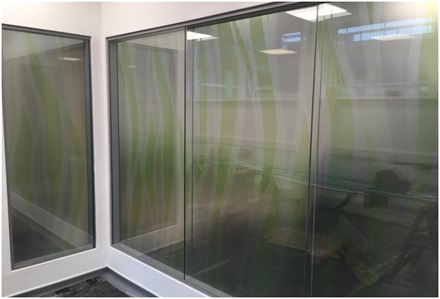 The job was part of the refurbishment of an important part of the hospital, the ward where patients would be prepared for surgery later that day. As part of the extensive work, large floor to ceiling glass partitions and windows were fitted throughout, giving the area a professional and modern look.

Due to the sensitive nature of the location, the glazing required a privacy solution and it was agreed that this also provided an opportunity to create a calm and stylish aesthetic finish. The hospital provided the design that they wanted to feature, with the initial brief being to supply a number of different potential finishes. 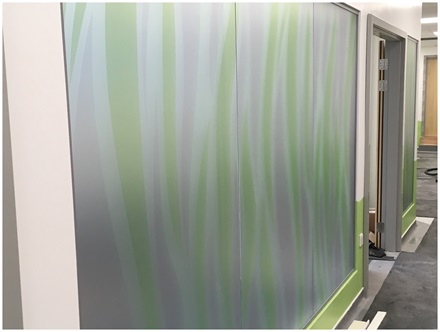 Upon receipt of the artwork, it quickly became clear that a frosted window film would be the most appropriate product. When applied to glass, frosted window film will provide the appearance of acid etched or sandblasted glass, preventing vision from both sides of the glass, while still allowing for excellent levels of light transmission. The film is long lasting and hard wearing, making it ideal for application to high traffic areas such as corridors and doors, while it also provides the ideal surface for printing onto.

With the privacy element established, attention turned to reproducing the desired design. The Window Film Company’s in-house graphics team were able to recreate the design in a usable format, redrawing the illustration to create a vector file. Work then began on establishing on the print finish.

Two options were presented to the project team at the hospital. Option one saw the design printed onto Frostbrite frosted window film, with the pattern then precision cut from the film. This variation would provide some vision through the glass so an alternative was presented, whereby the design was printed onto Frostbrite frosted film and left as an uncut design, delivering total privacy.

Upon receipt of the two samples, the client agreed that both options would be utilised – the cut patterns applied to glazing where privacy wasn’t a priority, with the uncut version installed to the remaining panes, completely restricting the view from both sides.

Confirmation was provided of which versions would be installed where and work began on printing the graphics.

Having been printed and finished by the in-house print department, the graphics were installed by a team of The Window Film Company’s fully qualified and vastly experienced fitters. The install project required co-ordination between the hospital and The Window Film Company’s operations team as other work was being carried out on site while the refurbishment progressed.

Once installed, the glazing was instantly transformed. The cut graphics provided a stylish, calming yet professional looking decorative feature, totally transforming the ambience of the ward. The fully printed panels did the same, but also delivered the necessary privacy.