The Oxfordshire-based training facility for the Civil Nuclear constabulary, a police service dedicated to the protection of UK nuclear sites, has undergone an extensive strip and replace window film project, carried out by The Window Film Company.

The large two storey facility features a front elevation featuring a swathe of large windows. The vast expanse of glass meant that heat and glare was a major issue, with solar energy passing through the glass and steadily heating up the premises until it became uncomfortable. The sheer quantity of glass meant that during the summer months, this would happen quickly. In addition, the bright sunlight would make it difficult to comfortably focus on screens, paperwork or colleagues; glare was an issue all year round. 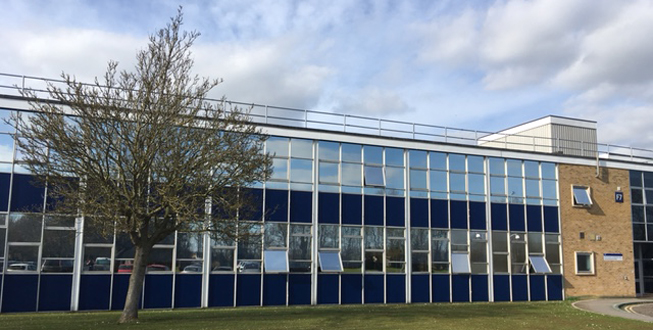 This had previously been addressed with an application of window film that had now reached the end of its effective life, meaning the heat and glare issues had been brought back into sharp focus. The Window film Company was engaged to deliver a solution.

A survey of the premises was undertaken to ascertain the state of the existing film and to measure the affected glazing. The visit made it clear that each of the 38 panes would require the old and failing window film to be removed before an appropriate replacement applied. The product chosen was High Reflective Silver, a specialist solar protection film that rejects up to 77% of the solar energy and reduces glare by up to 81%.

The film works by filtering out the harshest part of sunlight to reduce glare, while the reflective appearance of the film bounces away solar energy before it can enter the room and start to cause excess heat. This is achieved without sacrificing natural light or the daytime view to the exterior.

The three day project saw each affected pane stripped of the out-dated film, cleaned and recoated with the new product. The film was applied to the internal face of the glass, ensuring as long a lifespan as possible. The film was effective as soon as it was applied, with a large percentage of the glare filtered out and the interior temperature kept at a moderate level. In addition, the exterior face of the glass was given a sleek and professional mirrored appearance, giving the premises an aesthetic upgrade.

Click here to download this case study as a PDF document
Got a Question? Window Film FAQs
How To Fit Window Film Videos