The Window Film Company were contacted the owners of this modern house in London because they were experiencing problems with heat, glare and privacy. 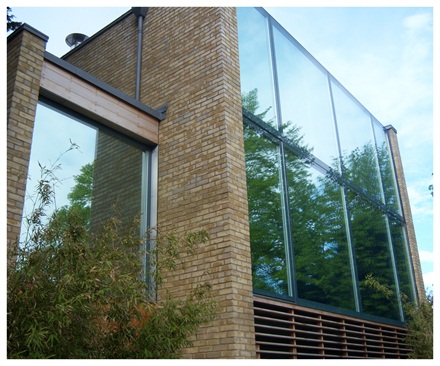 The best type of window film to help solve all three of these glass related problems is our High Reflective Silver Window Film.  Usually, this type of window film is used in commercial properties such as schools or offices, but because of the modern look of this house it suited it very well.

The solar window film was applied to all the windows on the front elevations of the house.  As you can see, the window film gives a mirrored appearance to the outside which can help to reduce the excess heat and glare by up to 80%.  The reflective surface can also give daytime privacy by stopping people from being able to see in clearly through the glass.

Even with this window film applied, the homeowners still have clear vision out through the windows during the day.  This means that they can see out, but neighbours and passers are unable to see in.  The window film can also deter burgulars because they will not be able to see in.

For more information on this type of window film or any other product in our extensive range, please call us on 01494 794477.