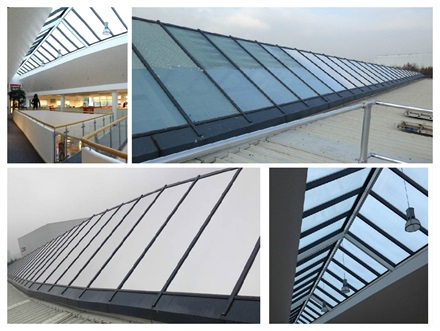 Levi Strauss is one of the most well-known brands in the world, but their large facility in Northampton was suffering from heat related issues. The Window Film Company was engaged to undertake a survey of the building and to identify and install an appropriate film solution.

A survey of the large premises was undertaken by one of The Window Film Company’s specialists and the source of the issue was quickly identified. Throughout the premises were a number of large roof-lights. These vast expanses of glass provided a welcome source of natural light, but at the same time allowed the sun’s solar energy to enter the premises, which on days of prolonged or strong sunshine can result in an uncomfortably high temperature.

The sheer volume of large windows (over 100 large panes) combined with the overhead position in which they were installed meant that the property was getting very hot very quickly, so a solution was required as a priority. The height of the glass meant it was immediately clear that an internal installation was not going to be possible, in turn making the choice of film a straightforward one. External grade High Reflective Silver is a high performance solar control film designed specifically for external applications; the tough outer layer of the film making it more durable and able to withstand the rigours of the different types of weather experienced in the UK.

The external version of the film provides the same excellent performance of the internal grade, preventing the constant build-up of heat without sacrificing natural light or the view to the exterior. The film works by reflecting away the solar energy before it enters the building, making window film a more effective solution than curtains or blinds, which as well as not being suitable for large scale installations both allow the heat to enter the premises whilst also blocking light and the view – almost eliminating completely the positive aspects of windows.

In addition to ensuring a moderate temperature within the property, high reflective silver delivers additional benefits such as glare reduction and protection against fading – both common problems in premises with large expanses of glass. Glare can be a year round problem, making it difficult to focus on machinery, screens or colleagues, whilst the UV rays generated by the sun are the biggest contributing factor to fading, potentially causing damage to upholstery, furnishings, flooring and equipment. Excess UV can also be damaging to skin, so by filtering out up to 99% of these rays the film chosen for this job would provide staff at the property with not only a more comfortable workplace, but a safer one too.

With the survey complete, the film type and price agreed, work began on preparing for the installation. The Window Film Company’s fitting teams are not only experienced but are also fully qualified, enabling them to work both safely, efficiently and effectively in a wide range of situations including externally and at height. The survey also revealed that there was existing film on the external face of the glazing. This film had reached the end of its natural life and would need to be removed before the new film was installed. The life expectancy of external window film is dependent on a number of factors including the positioning of the glazing and less predictable variables such as the weather and whilst it won’t perform at optimum level for as long as an internally installed film, advances in film technology mean that external grade products provide excellent and long-lasting results.

Due to the scale of the job, the installation took place over a two week period. The first part of the project was the removal of the existing film. This work was carried out with a great deal of care and attention, with a methodical and careful approach ensuring the film was removed without scratching or damaging the glass.  Each panel was cut on site to ensure a perfect fit for each of the 104 panes, which covered a total area of over 180 square metres.

The work was completed within the specified timescale and with the roof-glass protected, the benefits would begin to be realised immediately. This was a large scale job with a number of logistical challenges, but there is no upper or lower limit to the size of job that The Window Film Company is able to deliver on. For more details about the range of solar control films available or for details on other products including privacy solutions, safety or security films, manifestation and decorative options such as digital wallpaper or printed graphics, contact one of the team on 01494 794477 or by emailing info@windowfilm.co.uk