With soaring temperatures at a London leisure centre making life difficult and uncomfortable for visitors and staff alike, The Window Film Company was approached to deliver a manageable and effective solution.

The issue and project requirements

Dulwich leisure Centre is the home of London’s oldest public swimming pool. Originally built in1892, the beautiful building is home to a host of fitness facilities. The large and well stocked gym is located in the same part of the building as the swimming pool, which is notable for the huge of expanse of glass roof-lights.

The glazing runs the full length of the facility, providing a constant stream of natural light and an impressive original design feature. There was however a down side. The untreated glass was allowing solar energy to stream into the building, slowly heating up the facility each and every day. This was resulting in an uncomfortable environment for users of the gym and a solution was sought. 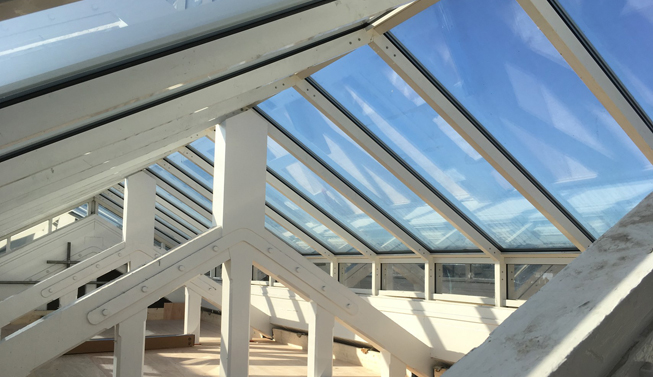 The project installation and solution

With the issue becoming increasingly pressing, a number of options were explored – including investigating the reconfiguration of the air conditioning systems. The Window Film Company was happy to be able to provide a more cost effective and straightforward answer.

High Reflective Silver solar control film is a technologically advanced product that has been designed to reduce solar gain. The film works by reflecting away a percentage of the suns energy before it has a chance to enter the property and add to the temperature. This slows down the steady build-up of heat throughout the day, ensuring a moderate and comfortable internal temperature.

The film has also been designed to allow good levels of natural light to pass through the glass, meaning that the solar control can be achieved without sacrificing the light levels and ambience.

Samples of the film were supplied to the client so that the film could be observed in situ and with the choice of product agreed, attention could turn to logistics.

The film was to be applied to over 170 individual panes, each set into the roof, way above ground level. After meeting with the leisure centre, architects and a specialist access company, it was agreed that a large scaffold structure would be created, allowing the installation teams to gain comfortable access to the glass.

The extensive structure was fully boarded, creating a solid platform for one of The Window Film Company’s vastly experienced installation teams to install the film over a three day period. The film was applied to the internal face of the glass, and once in place would be effective immediately.

At the end of what was a carefully planned and logistically challenging product, a total of 172 panes, 80 of which were more than 2 metres in length, had been treated and would immediately start working to prevent solar gain. The aesthetic finish was modern and stylish, while also allowing for the transmission of extra levels of natural light. Solar control without loss of light.

Most importantly, those working or using the facilities inside the building were immediately able to enjoy a more moderate and comfortable internal temperature. A modern solution that now works perfectly in tandem with one of London’s most historic leisure locations.