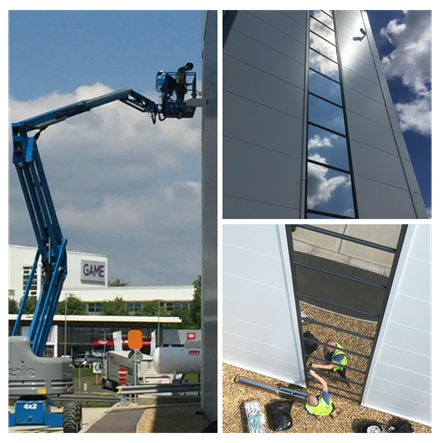 Glare can be a severe problem all year round. Left unchecked, bright light can pass through glazing and make for a very difficult and uncomfortable environment. It can make it difficult to focus on screens or colleagues, and in particularly bad cases, continued working in conditions exposed to glare can lead to eyestrain and other health issues.

An application of specialist window film can alleviate the issue and The Window Film Company was engaged to provide a solution to an ongoing problem at a large facility in Hampshire.

The Sainsbury’s distribution centre in Basingstoke is a vital part of the logistical operations of the supermarket giant. The building is a hive of activity for 24 hours a day, with staff working constantly inside. The building features a large expanse of sizeable windows and these were resulting in a problem. During the day, the bright sunlight would stream through the glass and make vision difficult.

Much of the work carried out inside the building requires the use of forklift trucks and other vehicles, so an uninterrupted view with no distractions is of paramount importance. The window Film Company was approached to deliver a solution that would deliver a year-round glare reduction solution.

High Reflective Silver is an advanced window film that delivers a number of benefits. It can help maintain a moderate internal temperature by reflecting away a percentage of solar energy before it enters a property and has a chance to warm it up. It can also serve to slow down the fading process; it blocks 99% of the sun’s harmful UV rays. On this occasion however, it’s most important function was as an excellent glare reduction product.

Once applied, the film reduces over 80% of glare, cutting out the harshest of the light, without blocking the view or sacrificing natural light.

The nature of the building meant that an internal application of the film wasn’t possible – large storage racks prevented the necessary access to the glass. In addition, many of the affected panes, of which there were 48, were at a height that necessitated powered access equipment to reach them. Using this sort of equipment inside the premises would have created too much disruption to daily operations and so an external installation was agreed.

This was made possible by using an external grade of the chosen window film, equally effective and specially developed to cope with the extra demands of being on the exposed side of the glass.

Each of the panes was over 1.1m in width and just under a metre in height, with the majority of the glazing well above ground level. The installation was undertaken by a team of The Window Film Company’s experienced and fully qualified fitting crews, utilising a ten metre scissor lift to complete the work.

The mirrored appearance of the film meant that the film was a perfect aesthetic fit, giving the glazing a modern and professional look. From a performance point of view, the film was effective immediately – cutting out the majority of the glare while still allowing natural light to pass through into the premises.

With the glare substantially reduced, the facility had vastly improved working conditions, with all staff able to rely on a comfortable environment.