The Window Film Company is proud to have been involved in the creation of an eye-catching exhibition at a prominent London gallery. 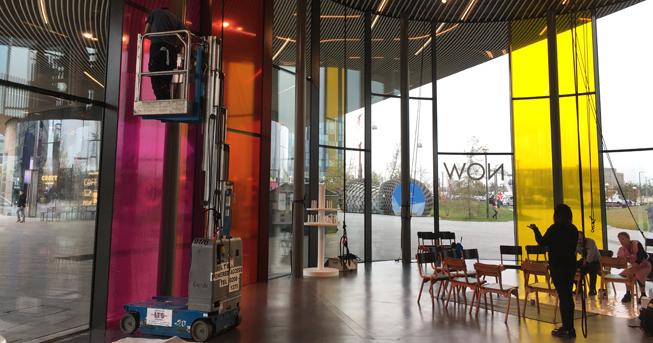 The project involved the installation of coloured film to three large panes of glass, providing the backdrop to the “What I Like” exhibition by up and coming star of the London fashion scene, Molly Goddard.

Yellow, pink and orange rainbow film was applied to three large panels, each measuring 7 metres in height and 2.5 metres in width. The transparent nature of the film means that while the appearance of the glass is changed to coloured, light still passes through and the view from both sides of the glass is maintained.

The size of the panes meant that several pieces of film were required to achieve full coverage, requiring the installation team to call upon their skill and experience to ensure that the joins between the separate pieces was undetectable. The installation required use of a powered access platform, with this and all other logistical considerations handled by The Window Film Company’s dedicated operations team.

The work was completed in a one day period, allowing the remaining preparations to take place ahead of the exhibition’s November opening. The show itself is an interactive exhibition, with oversized dresses suspended from the gallery ceiling. Each dress is on a pulley, allowing it to be lowered to any height, whereupon visitors are invited to add their own embroidery to the dresses.

For more info on how The Window Film Company can transform glass, call 01494 794477
Got a Question? Window Film FAQs
How To Fit Window Film Videos