Window film is a durable and flexible product, making it the ideal choice in a number of 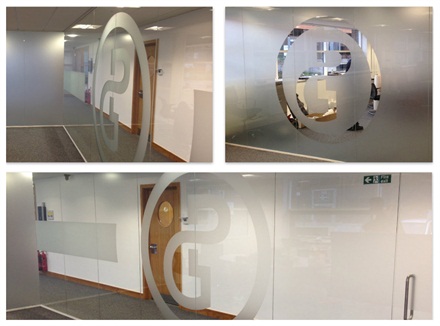 situations. Frostbrite frosted window film is particularly versatile, and thanks to The Window Film Company it was put to use as an impressive branding, privacy and manifestation solution for a Berkshire based client.

As with each job, the first task is to identify the exact requirements of the customer. Account Managers take time to discuss the job and to get a full understanding of what is needed before suggesting the most suitable solution. In this instance, the requirement was for a quantity of manifestation (required by law in specific circumstances), some large scale branding and also an element of privacy.

Having discussed the desired finish and appearance, it became clear that Frostbrite frosted film would deliver. Once installed, frosted film gives glass the appearance of acid etched or sandblasted glass, making it a highly effective privacy solution. In addition, the contrast the film provides against uncoated glass makes it ideal for manifestation; required to make glass visible.

Using state of the art computer cutting equipment it is also possible to cut frosted film into intricate patterns and designs such as logos. There was a requirement for two large logos and these were created in two different ways. The first design was cut from frosted film and installed onto a glass partition. The logo was floor to ceiling in size, serving to show off the brand and meet manifestation requirements.

The second logo was spread across a five panel glass partition. The entire partition was covered with frosted film to achieve an element of privacy, with the logo cut from the film serving to create an impressive and eye-catching feature from the company’s branding.

The end result is the use of a single, high quality product to meet three different requirements in an aesthetically pleasing, cost effective and efficient way. For more information on how Frostbrite frosted film could be the answer for you, please call 01494 794477.