HOME IS WHERE THE ART IS FOR WATFORD FC

With Football continuing to be the most popular spectator sport in England, increasing 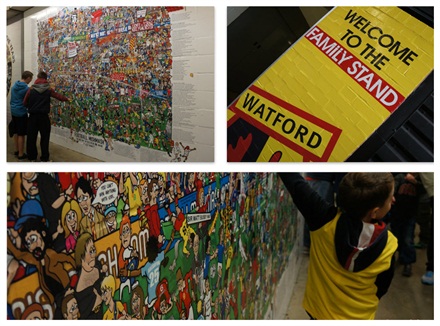 numbers of families are heading to see their team in action. This is certainly the case at Vicarage Road, home to Watford FC, and the Hertfordshire club enlisted the help of The Window Film Company to brighten up their dedicated Family Stand.

The Family Stand at Watford comprises a number of brick walls of different shapes of sizes, many of which the club wanted to decorate with family orientated, Watford themed images. Brick has traditionally been a very difficult surface to decorate, the nature of the material making it for existing decorative materials to bond successfully. The Window Film Company was able to offer a solution.

Brick vinyl is a specialist material designed with the sole purpose of being applied to brick and other similar surfaces. The application process involves heating up the vinyl and working it into the pointing of the brick – the finished product giving the appearance that the artwork has been printed directly onto the brickwork, the design appearing to, in effect, become part of the wall.The nature of the vinyl means it is suitable for use in high traffic areas, and with thousands of Hornets fans occupying the stand for each home game, the film will be seen by a large audience on a regular basis.

The artwork was supplied directly by the club and featured a range of designs. Among the images were a lifesize print of the Watford mascot, an interactive measuring chart, a Watford FC timeline and a floor to ceiling reproduction of a cartoon collage depicting an array of the most famous moments in football.

The film was fitted in a number of phases, with the work scheduled to take place around the busy fixture list. The work was complete ahead of a Saturday fixture, and supporters were clearly impressed with the bright new additions to the previously dark and uninspiring walls.

Now it is down to the team to ensure the football is as good looking as the stadium walls!