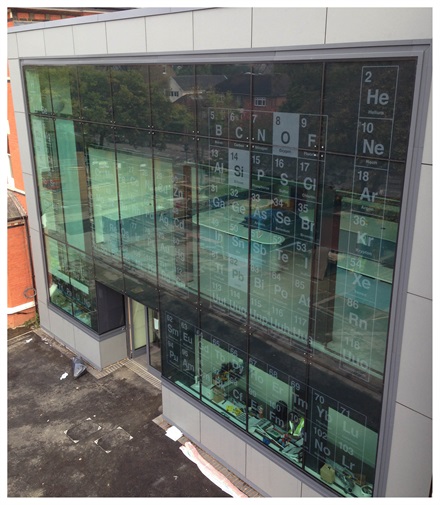 building works. As part of the redevelopment, The Window Film Company was engaged to apply graphics to the external face of one of the new buildings, creating an eye-catching and impressive feature.

The prestigious facility, which was founded in 1619, wanted to use the large expanse of windows at the front of one of the new science buildings to display one of the most important sources of information – the periodic table.

The idea was for each of the numerous of windows to feature one of the elements that form the table, creating a huge version of the iconic chart. The nature of the building meant that the film would have to be applied to the exterior face of the glass, so whilst the appropriate film was discussed and print proofs created, The Window Film Company’s operations team set about dealing with the logistical issues such as access to all parts of the glass; the top windows were four storeys from the ground.

Following discussions on the required appearance, it was agreed that the graphics would be created by printing onto optically clear film. This method allows for the perfect recreation of even the most complex graphics, with the unprinted area of the film remaining completely invisible.

Whilst the creation of the periodic table on such a large scale was clearly intended to be a highly visible and impressive display, the brief made it clear that the graphics should be printed at a subtle opacity level, giving the finished appearance an increased sense of style. Work was carried out by The Window Film Company’s in-house graphics and print team to arrive at the correct opacity level – searching for the exact balance between subtlety and clarity. A number of working samples and proofs were created and sent to site for testing, where they were installed and monitored for performance.

The graphics were to be printed in a frosted effect, giving the printed area a stylish and contemporary appearance and with the correct shade identified, work commenced on printing the individual panels that would make up the design. The windows encompassed a range of different sizes, so care was taken to ensure that each graphic was printed at exactly the right scale for each individual pane. The print was carried out using a state of the art UV printer, with the combination of high quality ink and advanced print techniques providing the best possible finish.

The film was fitted over a period of 2 days by one of The Window Film Company’s fully trained and experienced installation teams, with a cherry picker used to provide access to the majority of windows which were at height.

The finished installation provided the new building with an impressive flourish, the periodic table design giving the building a clear identity and a contemporary, inspirational and enjoyable appearance.

For more details of how The Window Film Company can supply and install full colour printed graphics for internal or external use, whatever the size of building or project contact one of the team by calling 01494 794477 or by emailing info@windowfilm.co.uk