A HELPING HAND IN HAMPSHIRE

Glare is an issue all year round, with the winter months often particularly challenging. The lower lying nature of the sun at this time means sunlight can enter premises at a different angle, creating an uncomfortable internal environment. The good news is that whatever the season, The Window Film Company can supply and install specialist anti-glare window films to alleviate the problem.

This project required a solution for the front of the large premises, that featured an extensive glass frontage. A row of ten sizeable glazed panels were causing issues, with light streaming through the windows unchecked, in turn making it uncomfortable for those working inside the Southampton based facility. 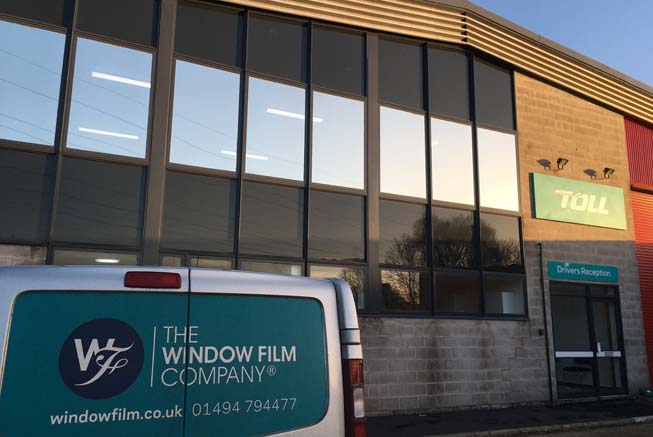 The Window Film Company offers a range of films that counteract the effects of glare, preventing the harshest of the sunlight from passing through the glass without making it unduly dark or blocking the view. Samples of the most effective films were sent to the client, allowing them to apply the film to the affected areas and to experience it first-hand.

Having taken the time to assess the films, the product chosen was High Reflective Silver.

This high-performance film has been developed to deliver a number of benefits. The primary use in this instance was for glare mitigation, with High Reflective Silver reducing this by up to 77%. The film, which is reflective on the outside during daylight hours, also acts as a hugely effective solar control solution, while also protects against fading by blocking 99% of the sun’s potentially harmful UV light.

The film was installed to the internal face of the ten large windows; each measuring over 2 square metres. The work was completed by a team of The Window Film Company’s fully trained and vastly experienced install teams, delivering a perfect fitting with the minimum of fuss and intrusion.

Once installed, the film was effective immediately, delivering a marked reduction in glare and increased comfort for those inside the building, along with a stylish external appearance, in keeping with the building aesthetic.

For more information on how The Window Film Company can help you combat glare, heat or fading in your workplace or home, please call a member of the team on 01494 794477 or email info@windowfilm.co.uk.