WALLPAPER FOR THE WIN

Hashtag United are a phenomenon, with a worldwide fanbase in the millions. With their popularity showing no sign of slowing, it was important that their London HQ looks professional and stylish. The Window Film Company was brought in to give the home of Hashtag a fully branded, striking new look.

The Hashtag United story began in 2013 when Spencer Owen began his popular YouTube Channel, filming himself and his friends taking part in semi-regular football matches. From the channel grew Hashtag United, a team that began by playing friendly fixtures that now plays in the Essex Senior League, part of the English Football League system. Another vital part of the setup if the successful and popular e-sports team, who are based at Hashtag head office. 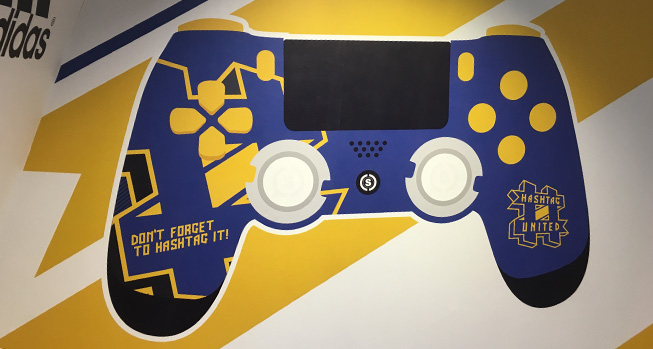 The Window Film Company had first come to the attention of the team when they were on the look out for a privacy solution. With video content being created on a daily basis and competitive e—sports fixtures taking place, it was important that passers by weren’t able to see into the premises. This was achieved by applying High Reflective Silver to a number of panes, ensuring that passers by would be met with a mirrored effect, with the view to the outside and excellent levels of natural light, maintained.

Having successfully delivered on the privacy brief, The Window Film Company was contacted again to deliver a brand new look for the office, featuring floor to ceiling, full colour, custom created graphics. Having surveyed the premises and gained a full understanding of the brief, it was agreed that printed digital wallpaper would be the most suitable product, delivering the most impactful, stylish and long-lasting result.

Using graphics that had been created alongside a number of Hashtag United’s commercial partners, The window Film Company’s in-house print and graphics team printed the designs onto high quality wallpaper – an advanced printable media that is long lasting and durable – vital for busy, high traffic locations. By using state of the art wide format printing technology it was possible to recreate the bold graphics in bright, vibrant colours, perfectly recreating the designs in large scale.

With the graphics printed, they were then installed by a team of The Window Film Company’s fully trained and vastly experienced fitters, delivering a perfect finish and created an eye-catching display, befitting of a team that is continuing to go from strength to strength.

For more details on how The Window Film Company can hit the target when it comes to giving your premises a stylish, professional and welcoming new look, or for details of the other films available, please contact a member of the team by calling 01494 794477 or email info@windowfilm.co.uk.