A single application of window film can offer a number of different solutions and is suitable for use in both commercial and residential settings. This project saw the installation of Light Reflective Silver window film to a home in the South of England, to protect against excess heat and fading.

Excess heat can be a constant issue for homes with large windows. Solar energy passes through untreated glass, steadily increasing the internal temperature until, especially during the peak of summer, the internal temperature can become unbearable. Window film helps to prevent this by reflecting away a percentage of the sun’s energy, preventing it from entering the property. It’s this method that makes window film more effective than curtains or blinds; both of these options are set back from the glass, thus allowing the heat into the room. Another advantage window film has over drawing blinds or curtains is that it doesn’t block the view or sacrifice natural light. 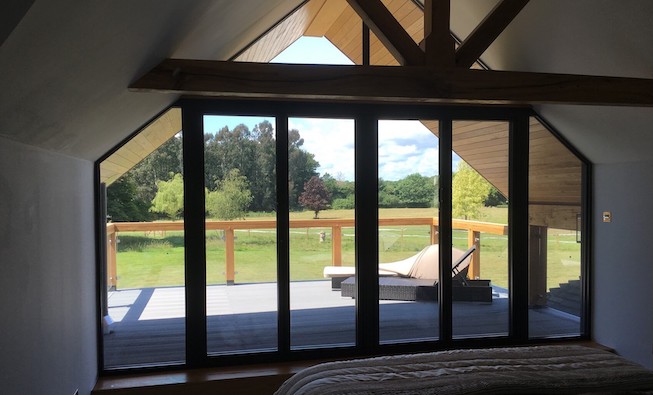 As well as the solar control element, the window film was necessary to help fight the effects of fading. This can be a hugely damaging and costly issue, caused by a combination of UV rays, heat and light, with each element passing through untreated windows. The majority of window films supplied and installed by The Window Film Company will filter out a high proportion of UV light (the biggest contributing factor to fading) with the film chosen in this case, Light Reflective Silver, blocking 99%.

The film was chosen as it provided a good balance between performance and appearance. While solar control was a consideration, it wasn’t the main purpose of the film (fading was the major concern) and this allowed for the use of a more visually subtle film. Once installed the exterior of the glass did take on a mildly reflective appearance, it’s the reflective element that serves to bounce away the solar energy, but the change in aesthetic is relatively neutral and understated. The view from the inside remained completely unobscured, allowing the home owners to benefit from the views and natural light afforded by the large swathes of glazing.

The film was installed by a team of The window Film Company’s fully qualified and experienced fitting teams, completing the job with the minimum of intrusion and fuss.

For more information on the range of window films supplied and installed by The Window Film Company, please contact a member of the team by calling 01494 794477 or email info@windowfilm.co.uk.