Excess heat and other associated issues such as glare and fading can provide problems all year round. Especially in locations with large quantities of glass. This was the precise situation at a Berkshire University, where as part of a large-scale renovation project, The Window Film Company was engaged to provide an extensive solar control solution to over 50 large panes of glass.

The large panes, each well over 2 metres in length and almost a metre in width, formed the roof of a University building and in their untreated state they were causing a number of issues for those working and studying inside. 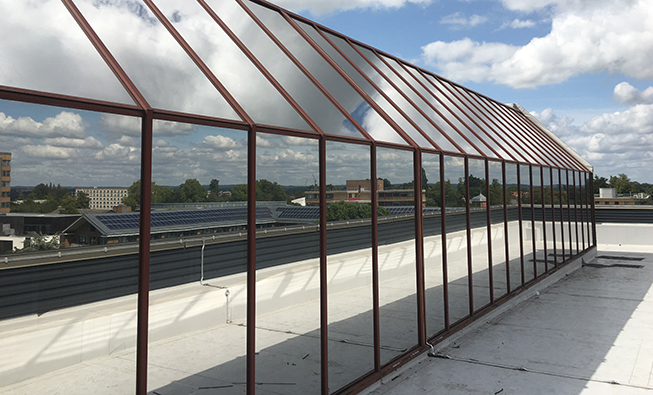 Without a protective layer such as window film in place, solar energy can pass directly through glass, steadily heating up the interior until it becomes uncomfortable. This issue is particularly problematic when there is a large glass roof or fully glazed side panels or frontages, with both of these situations true of this University building. As a result, the heat levels inside were quickly rising to uncomfortable levels, making it an unpleasant environment for staff and students alike.

After a site visit and survey, it quickly became apparent that an internal application of film would not be possible, so a specialist external grade version of High Reflective Silver was suggested as the optimum solution. The film, which has been specially developed to deliver long lasting performance while withstanding external weathering, works by giving the external face of the glass a sleek mirrored appearance, serving to reflect away a percentage of the sun’s solar energy before it can pass through the glass and steadily raise the temperature.

Solar control window film is far more effective than curtains or blinds, both of which allow heat to enter the premises while also blocking the view out and natural light – two of the major benefits of glazing and windows. Solar control is also a cost-efficient alternative to air conditioning which is often used to moderate the temperature in bigger buildings – an expensive and potentially environmentally damaging way of keeping cool.

Samples of the suggested film were provided to the team at the University, who were able to test the film in situ, examining the appearance and performance at different times of the day and in different weather conditions. With the film approved, the go-ahead for installation was given.

In addition to the requirement for an external grade film, the location and position of the glazing meant that a number of other logistical and access issues needed addressing. These were all handled by The Window Film Company’s dedicated Operations Team, who worked with the University to ensure that all was in place to enable a safe and successful installation. It was then over to a team of The Window Film Company’s fully qualified and hugely experienced fitting teams to carry out the work, fitting a total of 54 panes with immediately effective external grade High Reflective Silver window film.

Once installed, the film began delivering benefits immediately, maintaining a cooler temperature while still allowing a view from the inside out and allowing for excellent levels of natural light to pass through the glass. The film also serves to reduce glare and block potentially harmful UV rays, all with a sleek and stylish external appearance.

For more information about the extensive benefits of solar control window film from The Window Film Company, please contact a member of our team by calling 01494 794477 or email info@windowfilm.co.uk.