SPREADING THE WORD ON WINDOWS

The Window Film Company has printed, cut and installed a collection of impactful graphics throughout a secondary school in Buckinghamshire.

Frostbrite frosted window film from The Window Film Company is a long lasting, durable, multi-purpose product that can be installed in its original state to deliver a stylish privacy solution, or printed and cut to create bespoke graphics and branding elements.

As part of an ongoing programme of improvements, the school had decided to add a range of designs to a number of windows. The glazing in question provided a view from corridors into classrooms, and the brief was to create graphics that could be applied to these panes, providing a decorative upgrade without blocking the view.

The graphics were provided by the school and featured large outlines of words important to the ethos of the school - love, respect, hope and discipline, with each word featuring additional text, a passage from the bible, running through the centre.

With the brief and artwork supplied, the team at The Window Film Company were able to suggest the most suitable method of delivering the desired effect; the cutting and printing of Frostbrite frosted film. 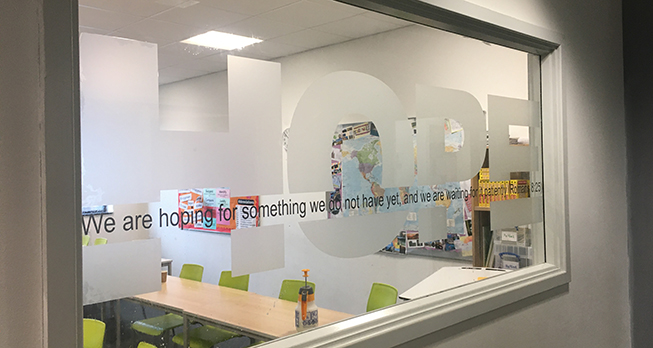 Using the measurements provided by the school, The Window Film Company’s print and graphics team were able to work exactly to scale, with the first part of the project to print the text that would be positioned through the middle of each large word. To make this text stand out, it would be printed in black ink, with the large words formed from standard Frostbrite film.

The process for creating each panel involved firstly printing the central text in black ink onto a sheet of Frostbite film. Then, using the precise measurements supplied, the sheet was precision cut using state of the art computer cutting technology, with the machine able to cut round both the black printed text and the large frosted letting. 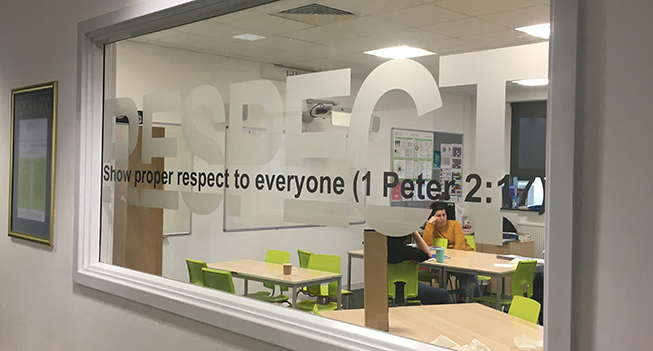 Each panel was checked by hand before being despatched with a team of The Window Film Company’s experienced fitting teams for installation.

The Window Film Company’s Operations team agreed a suitable time and date for the installation, with the primary consideration being that it was outside school hours, thus avoiding any disruption to the pupils and their study. Once complete, the glazing was transformed to feature a bold, striking and professional looking series of graphics, delivering important messaging while also giving that part of the school a stylish new appearance.

For more information on how The Window Film Company can help you to use cut graphics to transform your glazing, please contact a member of our team by calling 01494 794477 or email info@windowfilm.co.uk.