KEEPING IT COOL IN CONSERVATORIES

The Window Film Company offers a range of solar control films, each designed to help premises from reaching uncomfortable temperatures. This is a common problem in conservatories, with this project utilising high performance Optiview window film to address the issue of overheating.

Having been contacted by the owner of a large conservatory in Wiltshire, The Window Film Company was asked to provide a solution to excess heat. The glass roof was over 20 square metres in size, and during warmer weather was resulting in the internal temperature quickly reaching uncomfortable levels. 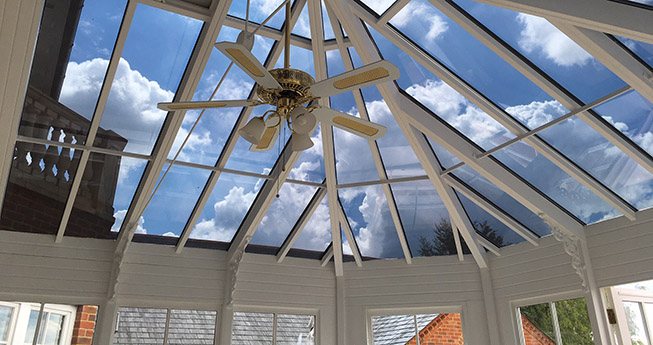 Excess heat is a common problem for properties with a large quantity of glass, as solar energy (heat) can pass through unchecked, steadily increasing the levels of heat inside. Blinds can be ineffective as they are set back from the glazing, serving only to trap the heat inside. They can also be difficult to clean and once drawn they also block natural light and prevent a view from the inside out – one of the big benefits of glass. As well as providing effective heat reduction, solar control window film from The Window Film Company protects the view from the inside out and is easy to maintain and clean.

Wherever possible, solar control window film is applied to the internal face of the glass, with the reflective external appearance serving to bounce away a percentage of solar energy. This is how the film works, by allowing a reduced amount of heat through the glass, preventing the steady build-up of heat.

The film chosen for this project was Optiview 05, an incredibly effective film (85% solar rejection) that has been specially developed to be “night neutral” – meaning that it has reduced reflectivity on the inside when night falls. This is noteworthy as reflective window film works on the light balance – it’s the side that is exposed to the higher level of light that takes on the reflective appearance.

The finished project left the conservatory with an effective solar control solution that didn’t block the view from the outside in or result in the sacrificing of natural light, leaving the happy owners to sit back, relax and enjoy the warmer weather.

For more information on the full range of solar control films supplied and installed by The Window Film Company, please call 01494 794477 or email info@windowfilm.co.uk.  Whether you require a solution for a commercial or residential setting, one of our expert Account Managers will be delighted to help.