BEAT HEAT AND GET TO GRIPS WITH GLARE

A single application of window film can solve a number of different problems. This installation by The Window Film Company at a Greater London home, served to deliver privacy, solar control, glare reduction and UV filtering.

Since being founded in 1998, The Window Film Company has prided itself on providing high quality window film solutions for residential and commercial customers throughout the country. During this time, one of the most popular films has been High Reflective Silver, a long lasting, durable and highly effective product with a number of instantly tangible benefits.

It was the range of solutions this film offers that resulted in it being used on a stylish family home in Greater London. The property enjoyed large panels of glazing throughout, including two sizeable sets of bi-fold doors, creating a bright internal environment and a stylish aesthetic throughout. The quantity of glass did cause some unwanted issues however, with excess heat, glare and UV rays sometimes making for an uncomfortable internal environment. Window film from The Window Film Company was installed to provide a solution to all three problems. 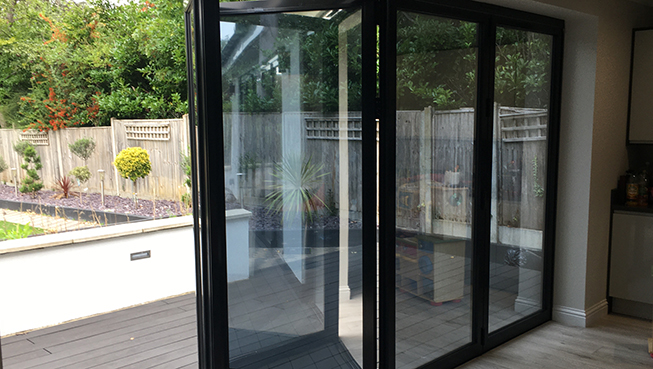 Over-heating can be a common problem for homes with large windows. Left untreated, sunlight passes through the glass, steadily adding to the internal temperature. In locations with a large number of windows, or big panes, this can happen quickly, especially during the summer months. Traditional methods such as blinds or curtains are ineffective as they still allow the heat to pass through the glass, while also blocking the view and natural light. Heat reduction window film blocks neither the view, or natural light, allowing for the maximum enjoyment of bright sunny days.

During daylight hours, High reflective Silver window film has a mirrored external appearance. It’s this reflective look that delivers the heat reduction, working by bouncing away a percentage of the sun’s solar energy (heat) before it can pass through the glass and add to the heat levels inside. The film has been specially developed to provide effective heat reduction while also allowing a view and for the transmission of natural light, so during daylight hours, while the external face of the film will be reflective, those inside will be able to see out, while also enjoying excellent levels of natural light.

While excess heat is a season problem, glare can be a year-round issue. Sunlight can pass through glass at different angles at different times of day, often making it difficult to comfortably focus. Along with heat, this was an issue that needed solving as part of this project, another reason for choosing High Reflective Silver, which reduces glare by as much as 81%. Once installed, the glare reduction was effective immediately, cutting out the harshest of the sunlight without making it feel unnecessarily dark.

The final consideration when choosing the film for this project was protection against UV rays. These are the single biggest contributing factor to fading, a process which can cause damage to floors and furnishings, with the impact often undetected until it is too late. By filtering out 99% of the sun’s potentially harmful UV rays, High reflective Silver from The Window Film Company can help slow down the fading process.

The film was fitted throughout the property by a team of The Window Film Company’s fully qualified and extensively experienced installers, with the fitted film effective immediately, providing protection against heat and UV, and reducing glare – all without blocking the view. The external appearance was also in keeping with the stylish look of the home, delivering a solution that was both effective and aesthetically pleasing.

For more information on how to reduce heat, glare and UV in your home with window film, please contact a member of our team by calling 01494 794477 or email info@windowfilm.co.uk.