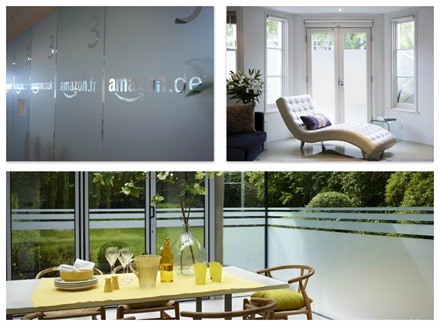 Frosted window film is the ideal way of achieving the same effect as frosted glass, without the expense of replacing your windows. After an application of one of our frosted films, your glazing will take on the exact characteristics of frosted glass – preventing vision both ways whilst letting a good level of natural light through the pane.

Frosted glass is useful in a variety of situations, and with a range of films that will provide the same result, window film is a versatile and durable alternative. The Window Film Company offer a full nationwide installation service, alongside an online store, allowing you to purchase frosted glass film available for DIY fitting.

Commercial frosted glass effect film, as with window film white frost, can be used in a variety of ways, with the high quality and durable nature of the film ensuring a long lasting, optimum level of performance.

Residential Frosted Window Film is a very popular choice for homeowners looking to achieve either privacy or decorative effects on the glazing in their home. In creating the appearance of frosted glass, the film provides an attractive, contemporary finish.

Frosted Window Film Patterns are available to buy quickly and easily from our online store. You can choose from a wide range of patterns, which will be computer cut out of the frosted film. Your film will be cut to your exact size specification, to ensure a perfect fit for each of your windows.

Off the roll Frosted window film is also available to purchase by the metre, with full 30 metre rolls of selected film available at special rates.