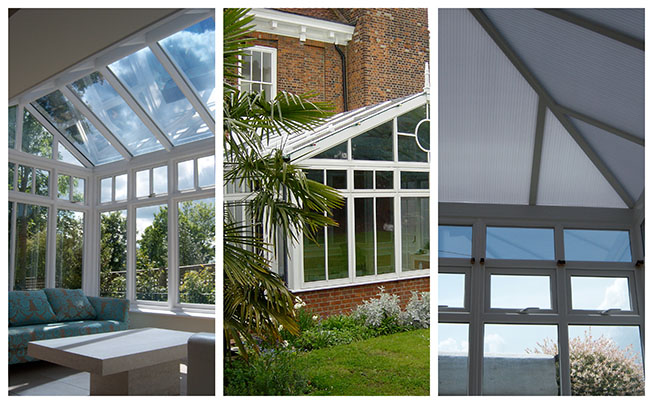 Conservatory solar film from The Window Film Company works by preventing the steady build up of heat, helping to deliver a more enjoyable temperature during warmer weather.

Solar control window film for conservatories is available in two different finishes; one for use on glass surfaces, the other for polycarbonate.

Supertint for glass is a specialist solar control film, designed for use on your glass conservatory roof. Once applied, the film is effective immediately and works by reflecting away a percentage of the sun’s solar energy before it can enter your conservatory, helping to prevent the steady build-up of excess heat.

Solar film for conservatories has been developed to ensure that it delivers high levels of solar control without making the inside feel cold. This is achieved by rejecting a percentage of the sun’s energy – not all of it. Warmth is still created, with excess heat rejected by the reflective film.

The external face of the film takes on a reflective appearance during daylight hours and is designed to deliver maximum performance without sacrificing high levels of natural light or the view out through your conservatory roof. This can be especially effective for people with south facing windows in their conservatory.

Supertint Poly, also known as CoolKote, is a solar control window film designed specifically for use on conservatories with polycarbonate roofs, instead of on a glass roof. The film will serve to reduce excess heat and glare, blocking and absorbing a percentage of the suns solar energy before it can enter the room and add to the temperature.

Better than blinds or curtains

Whichever solution you require, the effects are immediate and far more impressive than more traditional methods such as blinds. As well as being expensive to install and difficult to clean, roof mounted blinds are set back from the glazing, which means even when they are shut, heat is still able to enter the room and add to the temperature.

Blinds (and curtains) also have the added downside of blocking light when closed; conservatory window film has been specially developed to allow as much natural light to pass through the glass as possible. People who have air conditioning in their homes have also noticed the reduced need to run the costly A/C system as often, or for as long.

In addition to helping to maintain a more manageable and enjoyable temperature solar window film for conservatories offer a number of other benefits. Whether you have a glass or polycarbonate roof, a film from The Window Film Company will serve to significantly reduce glare, solar energy as well as reduce heat, making your conservatory a more comfortable environment in which to be.

Window films from The Window Film Company also block a high percentage of the sun’s potentially harmful UV rays – the largest contributing factor when it comes to fading. An application of solar control window film onto your glass or polycarbonate conservatory will help to slow down and mitigate against the fading process.

If your conservatory is too hot, The Window Film Company offers each type of solar control film for sale for DIY installation online. However, if you’d prefer an installation service, The Window Film Company carries outfitting across the country. For more details, information, samples or a quote, please contact a member of the team on 01494 794477 or email info@windowfilm.co.uk.

Beat the heat with solar control window film for your conservatory!